Epstein-Barr virus may be the primary cause of multiple sclerosis

A new comprehensive study determines a connection between infection with Epstein-Barr virus (EBV) and the development of multiple sclerosis (MS).1 Thus, all persons in the study developing MS were infected with EBV ahead of the MS diagnosis, and scientists conclude that it is highly likely that EBV is the primary cause of the development of MS.

Epstein-Barr virus was the most likely cause

Demyelization of the brain and spinal cord is an immune mediated process suspected of being the cause of viral infection.1 Among the numerous viruses suspected of being able to cause MS, EBV was the most likely.1 This is due to the fact that the risk of developing MS increases upon infection with mononucleosis, with an increased serum antibody concentration against EBV nuclear antigen (EBNA), and - as some pathological studies have shown -  with the presence of EBV in MS demyelized lesions.1

Behavior, environment, and character is not a deciding factor in the development of MS

In order to be able to rule out behavior, environment, and character as factors that increase the risk of developing MS, scientists examined the amount of antibodies against cytomegalo virus (CMV), which, like EBV, is transferred via saliva.1 The seroconversion among CMV negatives was identical to those who later developed MS and in those who did not.1 Scientists found that the risk of developing MS was lower in CMV positive persons than for people who were CMV negative.1 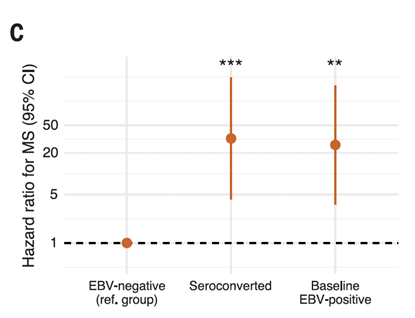 [Figure] (A) Number of persons what were EBV positive at the first, second, and third testing. Significantly more people who later developed MS were EBV positive at the second (28 of 33 MS patients) and third (32 of 33 MS patients) testing compared to people that did not develop MS (second testing: 40 of 90 persons; third testing: 51 of 90 persons). ****P<0,0001; two page Fisher’s test1

To shed light on the time related connection between EBV infection and the development of MS, scientists examined the serum concentration of neuro filament light chain (sNfL). sNfL is a sensitive, non-disease specific biomarker for neuroaxonal degeneration.1 As early as six years before an MS diagnosis, it is possible to detect elevated sNfL levels. As such, the scientists chose to examine whether sNFL levels would rise upon infection with EBV.1 The study showed that sNFL-levels were identical for those developing MS and the control group at the time of infection with EBV, but increased after EBV infection.1 Thus, there was no neuroaxonal degeneration among persons, who later developed MS, before they were infected with EBV, which indicates that EBV infection precedes both symptoms and the initial pathological detectable mechanisms associated with MS.1

Over 10 million people included in the study

The conclusions are based on the examination of MS occurrences among more than 10 million American soldiers of which 955 were diagnosed with MS during the course of their military service.1 To examine the link between EBV and MS data from each MS diagnosed person, it was compared to data from two random persons of matching age, gender, race/ethnicity, military department, and blood sample dates.1 This provided the scientists with 801 cases of MS and 1,556 control subjects for their analysis.1

At baseline, 35 in the MS group and 107 in the control group were EBV negative.1 All 35 in the MS group seroconverted before being diagnosed with EBV. The median time from the first positive EBV test until the development of MS was 5 years.1